This weekend should have been amazing. Instead it felt like it alternated between On moments and off moments, which I shall recap in the table below.

The show was awesome (as I said above).

The opening act, Samantha Murphy, was interesting. I like that she played barefoot and was funny enough to keep the audience entertained. Also girl could hold a note.

Jonathan Coulton ended up playing 2 sets because there were so many people who wnated to get in and the show was sold out. I think it had to do with some standing-room-only people leaving so others could see the second set.

I'm sure I could say tons about the whole show all the songs he played, but hopefully I'll have most of the show up on YouTube soon so you can see for yourself. Therefore, I'm just going to give you the highlights (as I see them).

In the first set he played "Better" which had me grinning like crazy the entire time. At the end of "Creepy Doll",

lordaerith and I held up our iPhones which were displaying lighters on them. JoCo saw us and totally cracked a smile. I made sure to turn the phone around so the rest of the audience could see it. Since he liked it so much, during "Mandelbrot Set" I ducked my iPhone under the table and used Google Images to find a picture of a fractal, which I then waved back and forth. This definitely made JoCo grin when he saw it. 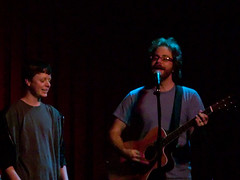 The best bit of the show, was when JoCo pulled up a member of the audience to help him with "Chiron Beta Prime". The kid who was brought up on stage, Michael Wood, was hilariously funny during the song and even "broke" JoCo. However, when it got to the point where he had to say "Message Redacted" in a robot voice, he didnt know the words or even that it was his turn to say something. It was so funny. (Picture of Michael and JoCo, courtesy of AntonOlsen)

Unfortunately as this was part way through the second set, we were picking and choosing which songs to record because we were running out of tape/batter power (If we had known it would have been a double set concert, we would have brought a second tape!). Therefore,

lordaerith decided not to record Chiron Beta Prime because "It's a Christmas song and it's not Christmas time." Also because I don't think he likes it very much, even though I do. Therefore, unless someone else was taping the concert (or just that moment) it will not be up on YouTube. Much sadness.

noeticist's party, but he had a lot to do, so we left. But not before I got to take a picture with him: Jonathan Coulton and Me, after the show.