I walked down to the club, not wanting to stop for food because the lines were crazy, I had 2 hours until k's choice came on, and I wanted to wait for Safire who was aware of the whole issue and was going to meet me there. As I passed the club, I heard a song I recognized. It was k's choice on stage doing a sound check and singing one of my favorite songs by them. After standing in the doorway swaying for a moment or two I realized I was singing along. I asked the guy how much the cover was and he said nothing. So I got my hand stamped and went in. I sat and just watched them do their soundcheck for a while. Then I tried to get in touch with Safire, but either she was driving and couldn't pick up or I was getting no signal. I started randomly staring over my shoulder. Eventually the older gentlemen who were sitting behind me introduced themselves because I kept looking there way. We chatted for a little bit. Finally right around 8, Safire shows up. Hurray! Glad I had a very-not-good-for-me snack in my purse because by that point the club was getting crowded and there was no way wer were going to be able to get food before the show.

The first showcase band came on and they were meh. It did make it hard to talk though. I'm not sure if Stree liked them or didn't like them because he kicked me a few times during their set.

Then it was time for k's choice. YAY!!!!!! I have been a fan of k's choice since 1997. I actually got to see them in 1996 when they opened for Alanis Morrisette, but I didn't know who they were then. I got to the concert late and only heard a bit of what they did and didn't really pay attention to it. I did buy their t-shirt at that concert because I thought the design on it was cool. Several months later my friend introduced me to their music and I was hooked. Since then they've never been somewhere where I could see them. The year I was in Europe they were touring the States. Then they took a long break and only got back together a little while ago. This was their first time playing the States in 7 years and was their only US date. They literally flew in from Europe to play a 40 minute set at SXSW and I'm lucky enough to live in Austin!

I started watching them from my seat, thinking that it'd be silly for me to be in the crowd with the big belly and all. It was just so amazing to be there and hear them live. And they sounded great! Their first song was off of their new CD which isn't available in the US yet (but I found out I can listen to on Facebook!). I don't remember what they played next, but after that they played "Everything for Free" which is one of my absolute favorites by them. I took some video of the song, but the sound didn't come out well so I don't want to upload it ~sigh~. After a while, the guys behind us convinced me that it'd be silly for me not to go up and be in the crowd and that they would hold our seats. So Safire and I went into the crowd, which actually wasn't all that crowded. 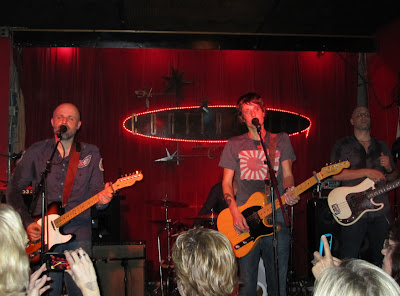 I remember that I did a lot of rocking back and forth and singing along and screaming. I was hoping that they would play "Butterflies Instead" but they didn't. They did play a lot of songs off of their third album "Cocoon Crash" which I thought was interesting because "Paradise in Me" has their most popular song on it and they're promoting their new album "Echo Mountain." I slowly worked my way closer to the front of the stage. At one point I was worried that Stree wouldn't like being in the middle of things, but he was actually quiet the whole time (unlike right now when he just kicked me). So either he was able to sleep through it all or k's choice is very soothing to him. The 40 minute set was way too short and the audience agreed, but a showcase is a showcase.

After they got offstage, I wandered over to the back room and waited for the band members to finish bringing their stuff offstage and pack it up. I got to meet Sarah and Gert and Eric (the rest of the band was too busy/talking to others) and they all signed my 4 CD inserts and Sarah let me have the setlist (which I also got signed). Sarah and Gert noticed how old school my shirt was and Eric recognized me from my posting like crazy on their Facebook page. ~insert fangirl squeeing here~ 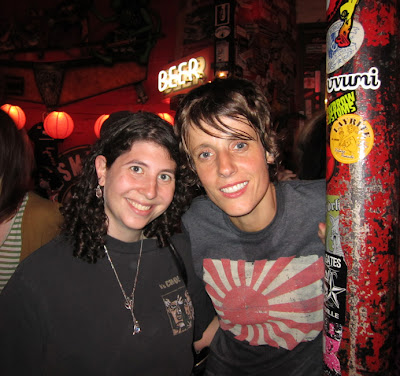 After that, I rescued Safire from the gentlemen we'd met. We walked to my car and then I drove her to hers because she had to park really far away. We drove separately to the closest Kerby Lane Cafe to my house, where there was a wait even though it was late at night. But by the time Safire showed up, I'd just gotten seated. We ate yummy food (finally!). On our way out there was a guy in an Angry Birds green pigs shirt and we both had an urge to ram into his stomach, but we didn't.

Here is a slideshow of the best pictures I took that night: